Every profession has it’s customs and superstitions, but mariners seem to have more than their fair share.

An old sailing superstition was that women on board ships were considered bad luck. However if the women were naked, they were considered good luck ; Mariners believed that a naked women before the ship had the power to calm gales and high winds and for this reason many a ship’s figurehead took the shape of a woman with one or two bare breasts.

Images of women have always played an important role in sailors lives. The Phoenicians, Egyptians and Romans already carved and painted female symbols on their vessels to protect them at sea.

The practice of figurehead carving reached it’s height during the 19th century. Images of Greek and Roman goddesses and other women became popular subjects for ship carvers. To the end of the century, it became common practice for a ship owner to commission a figurehead with the likeness of his wife or daughter.

Beginning of this year (2019), the restored wooden figurehead from the Royal Navy ship HMS Arethusa (1849) has been Grade II listed on the advice of Historic England. This figurehead is a rare survivor of the Crimean War and seen as an important symbol of Britain’s maritime heritage.

HMS Arethusa was named after a sea nymph from Greek mythology who fled her home in Arcadia under the sea and came up as a fresh water fountain in Sicily.

This wooden figurehead was carved by James Hellyer and Sons of London and Portsmouth, who had a long tradition as ships’ carvers. The  3.5 metre high painted female bust, wearing an early Victorian period dress,  has her right breast exposed, ready to calm any storm at sea… 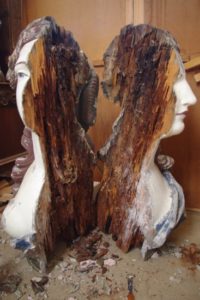 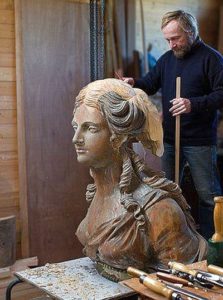